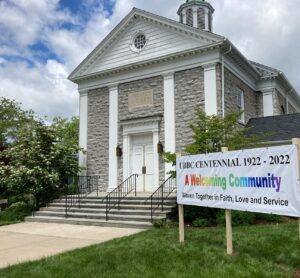 University Baptist & Brethren Church in State College, PA, which holds dual affiliation with the American Baptist Churches USA and the Church of the Brethren, is marking its centennial in 2022. UBBC has been a member of the Philadelphia Baptist Association since 2005.

This church was the idea of Mrs. Nannie P. Eigelberner of State College. She was a friend of Dr. C.A. Soars, general secretary of the Pennsylvania Baptist Convention and convinced him in 1921 to come to State College to assess whether there was enough interest in town to start a Baptist church.  At the time, Penn State enrolled only 3,500 students and the population of the town was about the same.

Soars concluded that there was enough support, and so, on October 4, 1922, forty members, including five Penn State students, signed the charter for University Baptist Church.

The new church and Penn State were closely intertwined. One of the reasons given by the founders for starting University Baptist was, “that Baptist students coming to Penn State do not feel at home in other churches and in many cases lose interest in religious activities altogether.”

From the start, outreach and service were hallmarks of University Baptist. At first, the outreach was directed to Penn State students. That quickly broadened, however, to include issues of social justice and equity.

In the 1930s, the church provided temporary accommodations for visiting Black laborers unable to find lodging in town. In 1953, no barber in State College was willing to cut the hair of Black men. UBC member Howard “Red” Smith broke that barrier in his barber shop.

Refugee resettlement has long been an active mission of this church, beginning with one Polish refugee in 1949 and continuing to the present year when UBBC helped a family from Afghanistan to resettle in State College. In between, the church has assisted many refugees from Vietnam, Cuba, Romania, Russia, and Myanmar.

Forty-six years after University Baptist was begun, another group of Christians in State College was searching for a worship home. They were members of the Church of the Brethren, one of the nation’s historic “peace” churches. They concluded that the town already had enough churches so they “shopped around” to find one where they might fit together well in terms of character and values. In 1968 the members of UBC invited the Brethren group to join their congregation through dual affiliation. That’s how UBC became UBBC.

The commitment to mission outreach, already strong, deepened. UBBC collaborated with other community groups to establish the in-patient psychiatric unit at the local hospital, Volunteers in Prison, the State College Food Bank and the first Habitat for Humanity affiliate in Pennsylvania. In 1982, UBBC began the Alternative Christmas Fair which has raised more than $830,000 for charities going into 2022, its 40th anniversary year.

Today, the UBBC campus includes not only its church building but also three adjacent homes used by non-profits serving the community. One houses survivors fleeing abusive situations. Another serves as an office for an organization offering mediation and restorative justice services. The spaces are offered by the church at far-lower-than-market rates.

Believing that God’s unbounded love and grace are offered to all and meant to be shared and celebrated by all, UBBC embraces persons of every race, sexual orientation, gender identity and expression, ethnic and religious background, and economic means as vital and integral members of God’s family.

Sadly, it was this “welcoming” stance that caused the Centre Association of American Baptist Churches of Pennsylvania and Delaware to “disfellowship” UBBC in 2001. UBBC set out to find another Baptist home. And on May 7, 2005, following numerous procedural steps, UBBC’s affiliation with the 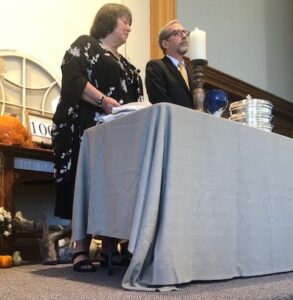 The theme of University Baptist and Brethren Church’s centennial is, “A Welcoming Community, Woven Together in Faith, Love and Service.”

The church at present is served by an interim pastor, the Rev. Thomas Beers of Wayne, PA, following the July retirement of the Rev. Bonnie Kline Smeltzer, who served for almost 20 years.

To learn more about the University Baptist and Brethren Church visit their website at www.https://ubbcwelcome.org